At the start of this month, the Panasonic GH4R was announced at the IFA trade show in Germany, along with an extensive software update for existing Panasonic GH4 users. The GH4R is Panasonic’s answer to the growing demand from the film industry for a hybrid photo/video camera with unlimited (read: longer than 30 minutes uninterrupted) 4K recordings in diverse recording speeds and formats (Cinema 4K: 4096×2160 / 24 fps and QFHD 4K: 3840×2160 / up to 30 fps in MOV/MP4), including compatibility with V-Log L video.
The new functions – except for the unlimited video – are also available for existing users of the Panasonic GH4 via a paid software upgrade, by purchasing a software key and updating the firmware of the camera to version 2.4. The updated GH4 can not record for longer than 30 minutes without interruption after installation of the firmware update. I have made a number of 4K video recordings of situations with an extremely high contrast, in order to see whether I could see a difference between Vlog-L and the ‘Natural’ image style of the Panasonic GH4. 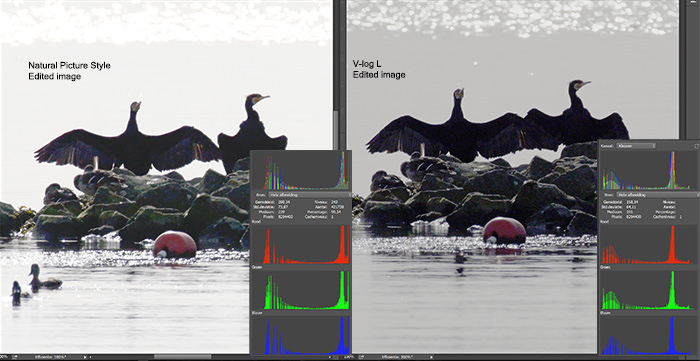 Pity that the V-Log L image style is not available in the 4K Photo Mode, since I would like to use V-Log L there as well, due to the increased dynamic range.

Differences between 4K shots made with the standard image style of the Panasonic GH4 (Natural) and V-Log L are clearly visible without editing the images. The V-Log L recording has very little contrast. After applying the Look Up Table (LUT), which is included by Panasonic with the installation files for the firmware) and with which you adjust the contrast, it is clear that the highlights (reflections in the water above the cormorants) have been better preserved in the V-Log L shot. In the shot of a seagull below, the highlights have also been better preserved in the V-Log L shot (right). If you had underexposed the shot on the left by two stops, in order to protect the highlights, then the rendering in the shadows would have been hopelessly lost. Before V-Log L came out, I tried out different image styles with manually adjusted contrast, sharpening and saturation. All my attempts were less successful than V-Log L. With V-Log-L, I no longer have to be so alert to possible overexposure, and I simultaneously get more rendering in the shadows than I was used to. This particularly applies in situations with high contrast. In situations with low contrast, the differences are much smaller.

The V-Log L shot (right), after application of a LUT, shows both more details in the shadows and in the highlights. The highlights in the normal shot (left) cannot be saved in post-editing.

If you couple the Panasonic GH4 to an Atomos Shogun, then you can save the video recordings in a higher color depth than in the video that you save in the camera. In addition, the larger storage space of the Atomos Shogun is ideal for those who do want to film for longer than 30 minutes uninterrupted with a Panasonic GH4R. At first glance, it appears that the differences between V-Log L and the Natural image style in the 10-bit files are less large.
Below is a video that starts with two shots of boats, made with the Atomos Shogun in 10 bits (4:2:2): first with the Natural image style and then with V-Log L (also with the Atomos Shogun in 10 bits 4:2:2). Then there are two shots of a heron (in-camera 8-bit 4K recordings), where the V-Log L shot has better preserved the highlights. Finally, a pair of 8-bit recordings of a cow and of swans, whereby the edited V-Log L shots are shown at the bottom and the shots with natural image style, above.
If you compare 10-bit files in natural image style with 10-bit color-graded V-Log L files, then the V-Log L shots show a bit more rendering in the shadows and in the highlights. But the differences appear less large in the first shots that I took than for the 8-bit files that are saved in the camera. That might be good news for those who already have an Atomos Shogun, but if you do not have one, then the purchase of V-Log L is quite a bit cheaper than the purchase of an Atomos Shogun.

Shots made with V-Log L are reminiscent of professionally scanned film material. Panasonic also indicates that V-Log is derived from Cineon: a standard for scanned high-quality film material. I have already scanned all my old negatives and slides as 16-bit TIF files, with retention of as much of the dynamic range as possible. Unedited, those shots look terrible: flat and gray. But as soon as I edit the scans, I get files with a beautiful color reproduction and more rendering in the highlights and shadows than in the 8-bit jpg scans that I had initially made. The same applies for V-Log L: the unedited images are flat and gray, but as soon as you adjust the contrast and the colors with the Look-Up-Table (LUT) that Panasonic provides, then you have the same colors that you were used to from Panasonic, but with better rendering of shadows and highlights. In the video below, I show two recordings as an illustration: first the unedited V-Log L shot, then the same recording to which Pro Color Grading is applied in Adobe Premiere (with 1 click of a button).
{vimeo}138940273{/vimeo}

Panasonic GH4R (with built-in V-Log L) or a paid upgrade of a Panasonic GH4 do indeed give the professional videographer images with a larger dynamic range. V-Log L is not intended for those who want to do as little editing of video recordings as possible. But in my eyes, it is a must for every professional videographer with a GH4. The amount that Panasonic asks for the upgrade is low when you see what you get back in image quality. V-Log L is a life-saver in those situations where, due to high contrast, you would be heavily underexposed if you did not have V-Log L.
Because the lowest ISO setting of the Panasonic GH4 with use of V-Log L is 400 ISO, you will need a variable ND filter in good weather in order to be able to use a large aperture. If you make a recording with V-Log L in a situation without much contrast, then you could “expose to the right”. The signal-to-noise ratio in the shadows of the V-Log L recording will then be better than if you made a standard video recording.