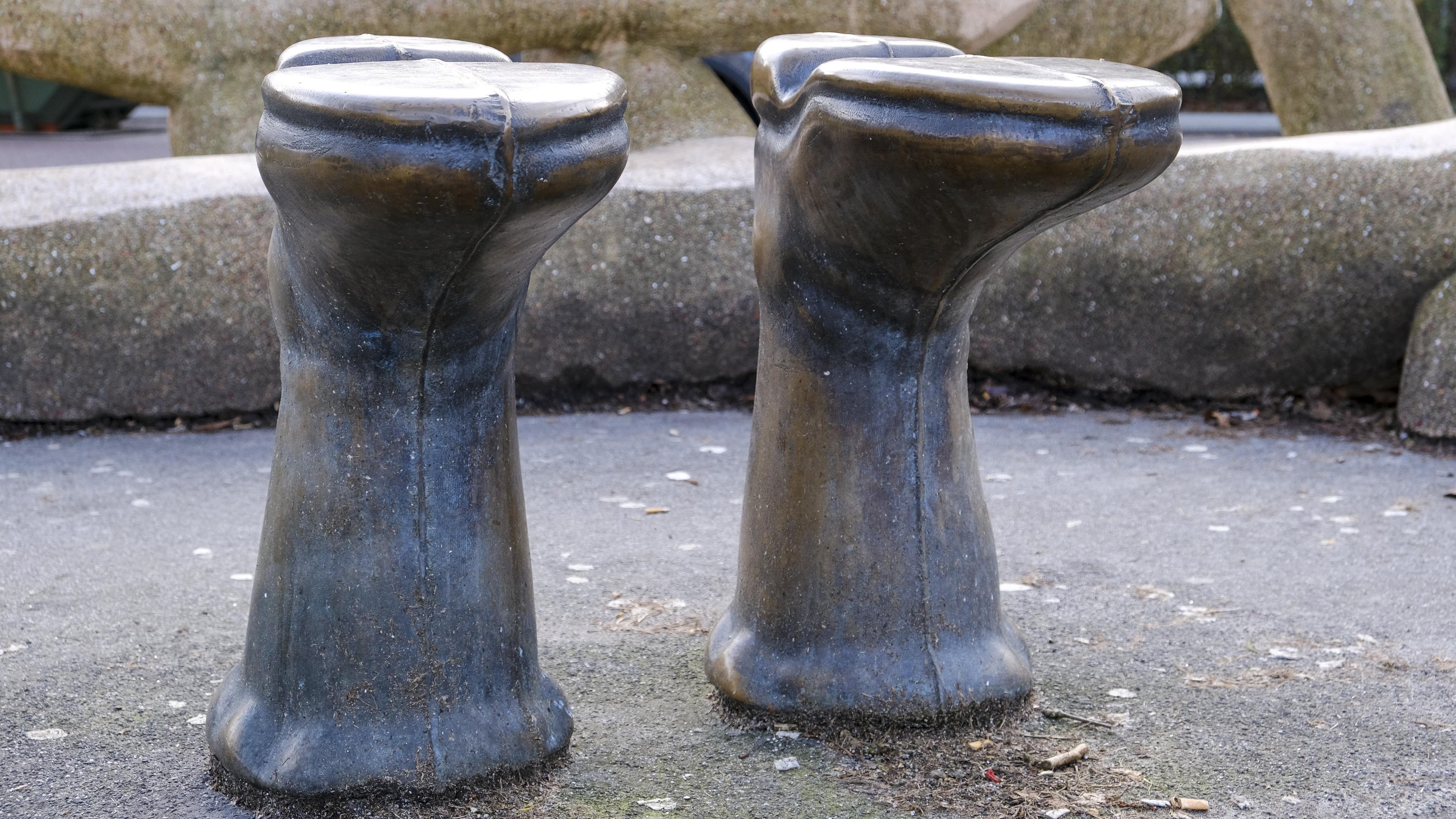 The Fujifilm X-S10 bundles many of the specifications of the X-T4 into a smaller body that is easier to use. The price is also a lot lower.

S for small or slim, or perhaps simple.

Fujifilm did not announce what the S stands for in the name of the X-S10, but we can take a guess: for small or slim, or perhaps simple. Let’s start with the size: the X-S10 measures 126 x 85x 65 mm and weighs 465 grams. In terms of dimensions, it sits just between the X-T30 and the X-T4. In terms of specifications, the camera is closer to the X-T4 than to the X-T30. For example, the X-S10 does have image stabilization in the body and the X-T30 does not. The X-S10 also has a deep grip, making it easy to use even with larger lenses. 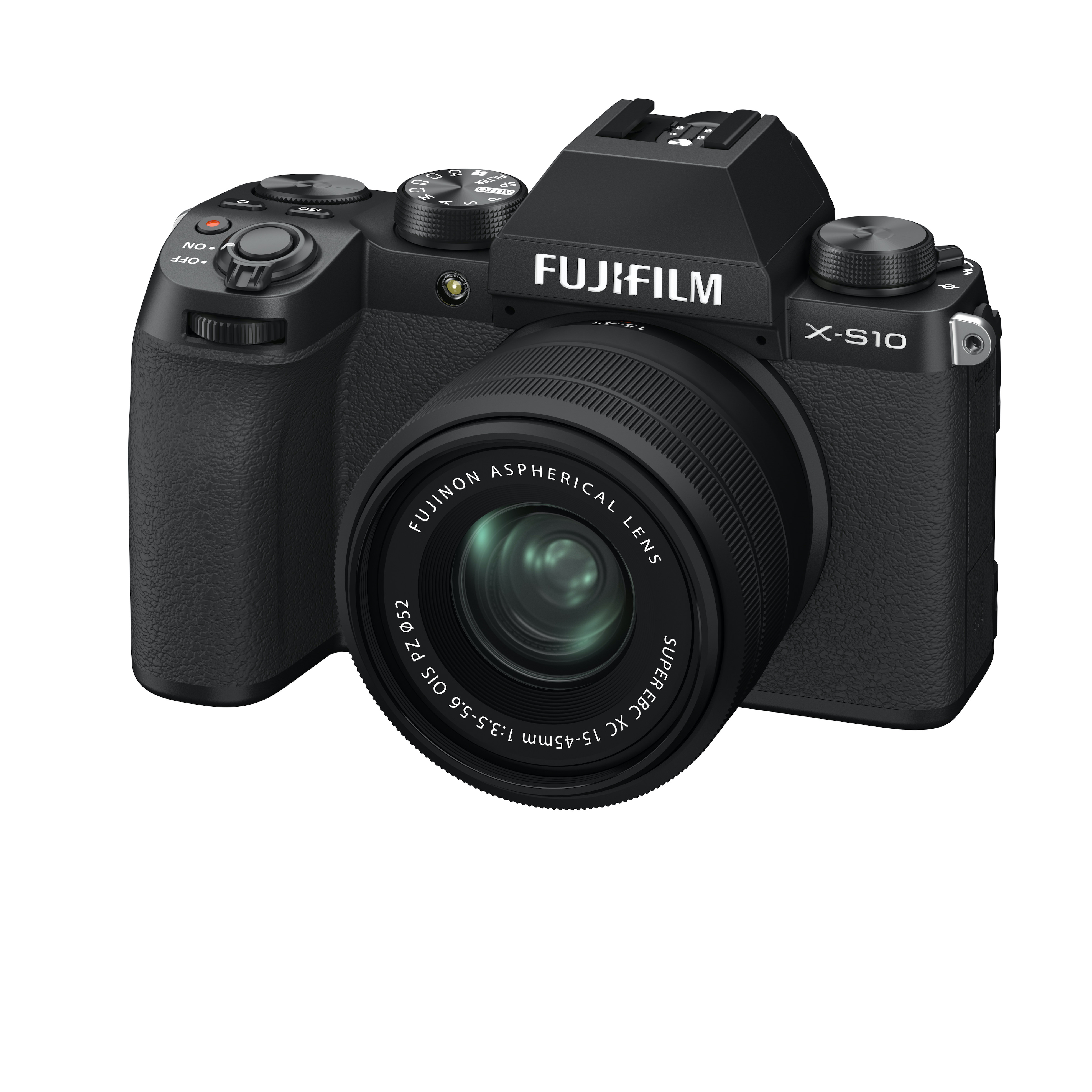 What is also striking about the X-S10 is that the camera has unmarked knobs. Only the exposure program dial displays settings. The other dials do not have any lettering. Fujifilm has let go of the classic control with a real shutter speed button that we know from the other models. Of course, the dial on the right shoulder can be used as a shutter speed button, only you will now have to look on the screen or in the viewfinder to see what you have set. This disadvantage is offset by the advantage that the button, like almost all others, can be programmed to perform other tasks. This makes the Fujifilm X-S10 feel less analog. At the same time, photographers switching from another brand or from digital SLR will more quickly feel familiar with the X-S10. With the X-S10, Fujifilm is therefore also explicitly aiming at a new audience. 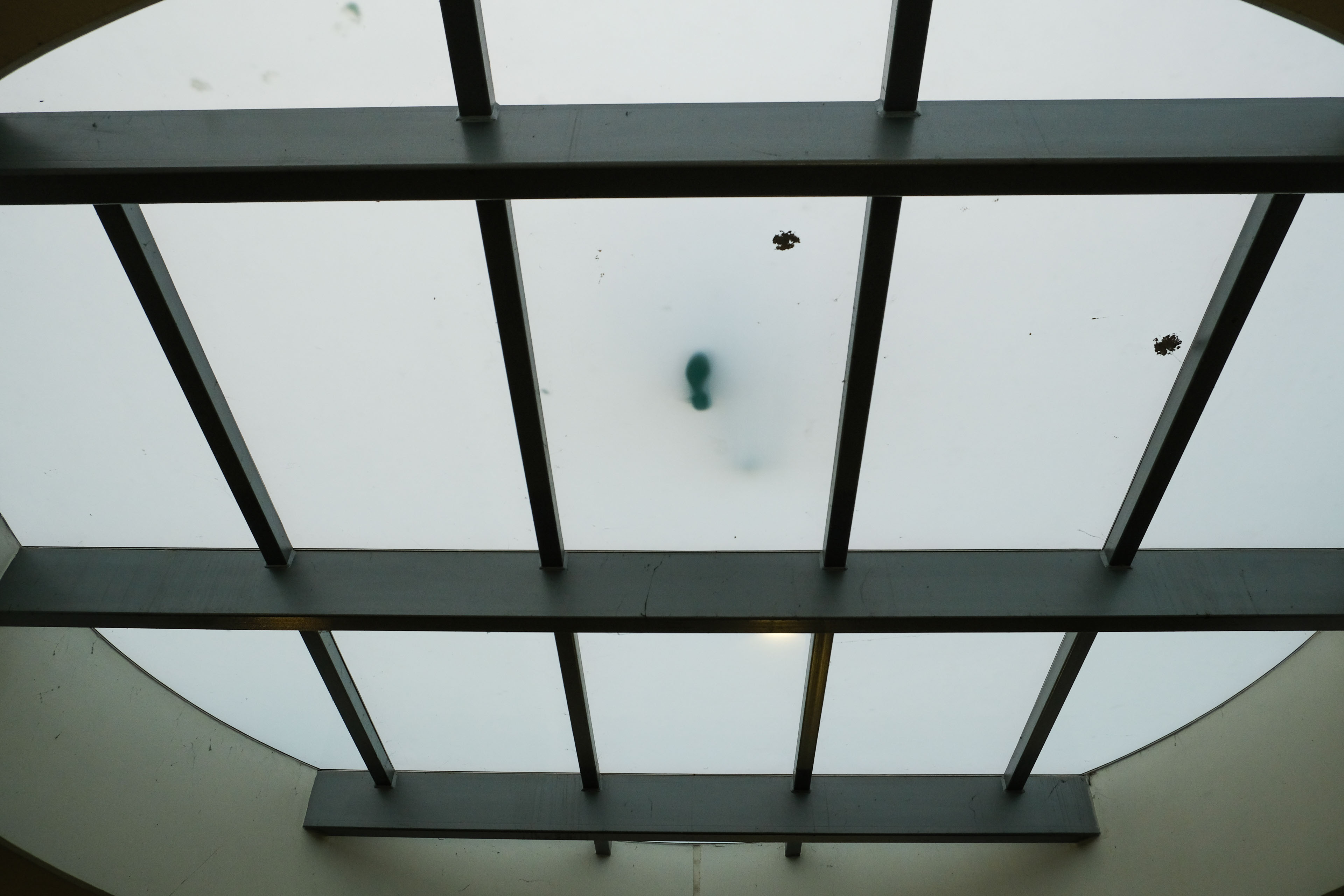 In addition to the changed operation, the X-S10 contains even more adjustments. The Auto and SP shooting modes have become more useful on the X-S10. Now you can also work in RAW format in these modes instead of just in jpeg. The Color Chrome effect for color enhancement and the dynamic range are now also adjustable in these modes. In addition to the 18 familiar film simulations, the X-S10 can also fully automatically select the film simulation that best suits the scene. The X-S10 is thus a camera with which you can easily enter the Fujifilm system, but which can also grow with you for a very long time.

What is immediately noticeable about the Fujifilm X-S10 is the deeper grip, which is the most similar to that on the X-H1. That’s unusual for such a compact body. As a result, the X-S10 fits very well in the hand, even if you have slightly larger hands. The grip also ensures better balance for larger lenses such as the 100-400mm. The housing feels sturdy and robust. No shortcuts were taken on the materials, using a magnesium alloy for the body. The camera’s just not weatherproof. That does not mean that you have to watch out for every drop, but that you should not use the camera for long periods of time in rain or snow. 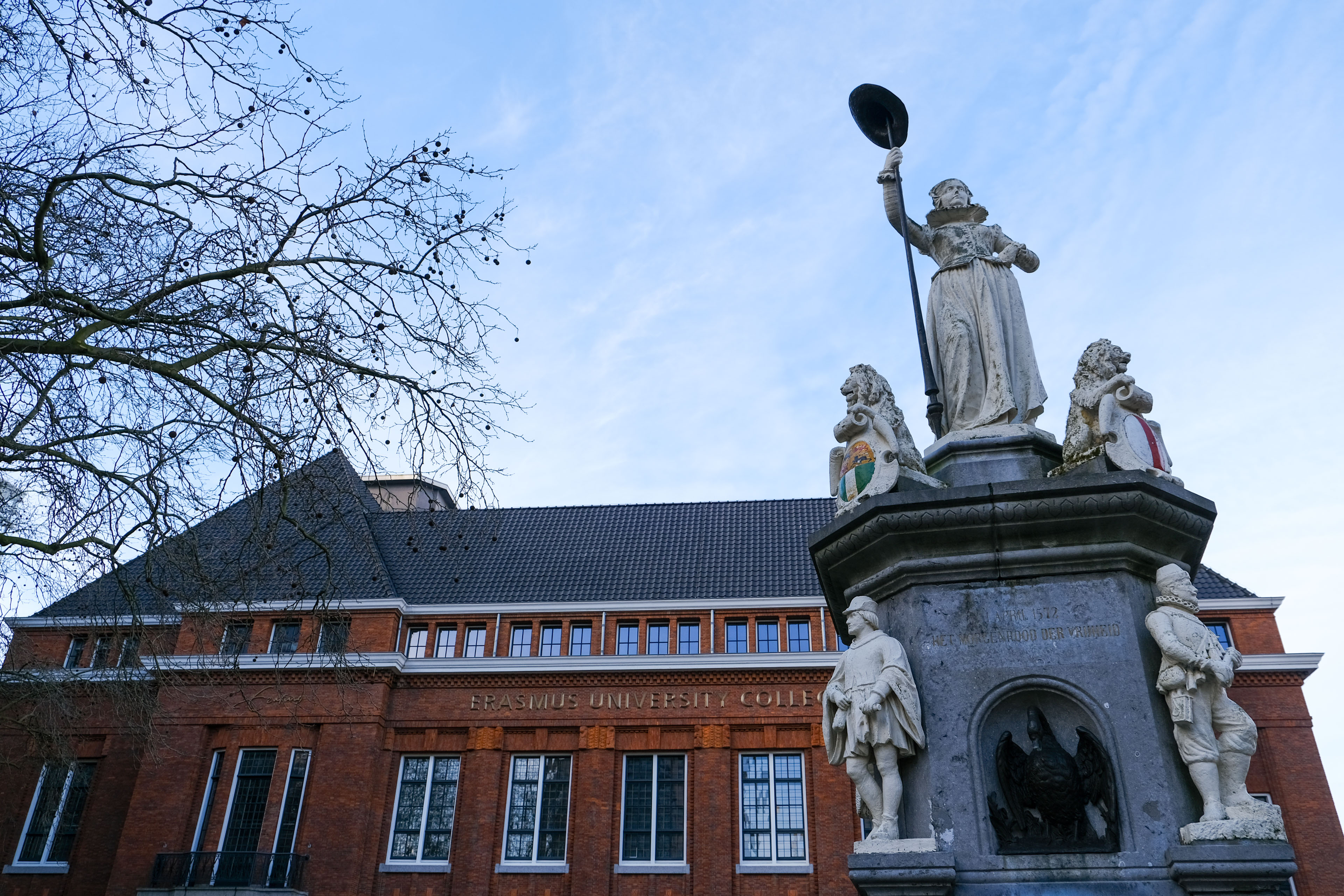 The operation of the X-S10 is designed differently than with the other X-cameras. Instead of separate shutter speed, ISO and exposure compensation dials, there is now one shooting mode dial (Auto, SP, P/A/S/M), as with many other brands. This makes it a little easier to operate for those who do not want to work (semi-)manually. On the dial there are four programmable positions (C1 to C4) where you can store your favorite settings for portrait, studio, outdoor and sports, for example. The camera has a small, built-in flash that can serve perfectly as a fill flash in high contrast situations or when it is dark. On the back of the camera we find next to the screen only two buttons for the menu and the display and a small joystick. That joystick protrudes far enough to also operate well with gloves and is therefore very useful despite its small size. You can also press it. This is useful for confirming the autofocus point, but also ensures that you can scroll through the menus very easily with it. 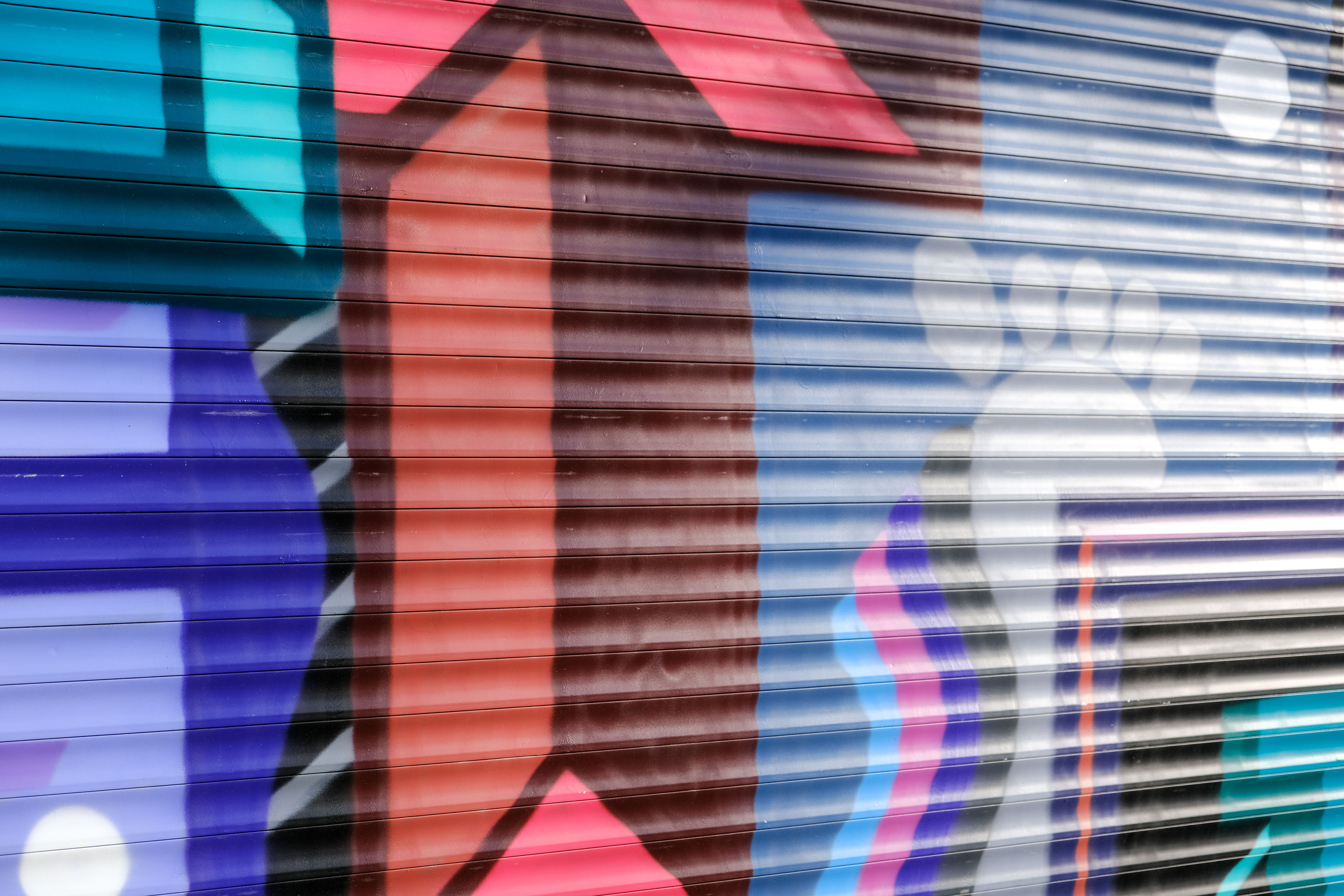 The X-S10 has the same battery as the X-T30, which is smaller than that of the X-T4. As a result, the number of shots is limited to 325 images according to the official standard. If you shoot a few more shots in quick succession and look a little less through the viewfinder or on the screen, that number is much higher in practice. The battery can be recharged via the USB-C connection.

The X-S10 has an electronic OLED viewfinder with a resolution of 2.36 megapixels and a high refresh rate of 100 fps in the “boost” mode. The viewfinder magnification is 0.62x. That’s not very big these days, but it’s fine to work with. The LCD screen has 1.04 million pixels and can fold out and turn completely so that it is also suitable for vloggers. It is also touch-sensitive for operating the menus. Unfortunately, not all menu options are touch-sensitive, so operating the menus in this way can sometimes be a bit frustrating.

Just like the X-H1 and X-T4, the camera is equipped with a five-axis image stabilization system. This IBIS system has been newly developed for this camera, and is 30% smaller and lighter than the mechanism in the X-T4, which in turn was already 30% smaller than that in the X-H1. The gain is due to the use of more compact components and a new layout of the motherboard. Fujifilm therefore has an IBIS system that also fits in very compact cameras. According to Fujifilm, it offers six stops advantage for lenses without image stabilization, both for photo and video. That is slightly less than on the X-T4, which offers 6.5 stops profit, but a full stop more than on the X-H1. This X-S10 is also the first mid-range camera equipped with a special motion sensor that helps to suppress small vibrations caused, for example, by the mechanical shutter mechanism.

In practice, image stabilization works well, and, in optimal situations, you can get quite close to the values that Fujifilm states. An advantage of about four stops must be easily achievable. The stabilization also works quite well when you are filming, although it sometimes wants to try to fight a camera movement. Especially for video, there is also the option to turn on electronic image stabilization. That is highly recommended if you move yourself during filming, even if it creates a small 1.1x crop of the image.

With the same 26-megapixel image sensor and image processor as the award-winning X-T4, the X-S10 delivers almost the same high image quality. The sharpness is high and noise levels are low. Especially at higher ISO values, we see very little noise. At the same time, we also see a decrease in the details, which makes us think that some noise reduction will already be done in the RAW files in the camera. The X-S10 sensor is of the Dual Gain type, with a second step in image quality at 800 ISO. At this setting, the dynamic range and noise are better than at slightly lower ISO values.

The jpeg files from the camera also look fine, with a nice balance between sharpness and noise reduction. There are cameras that achieve slightly higher sharpness, or less noise at high ISO values, but no cameras that do both better than the Fujifilm. If you want to work a lot with images directly from the camera, the X-S10 is an excellent camera, because the different film profiles are easy to choose with the rotary knob on the left shoulder of the camera. This allows you to easily switch from a soft Astia profile to a harder Provia profile or even a colorful Velvia profile. The explanation you get with the profiles makes them extra useful, especially for (younger) users who did not live through the film era. 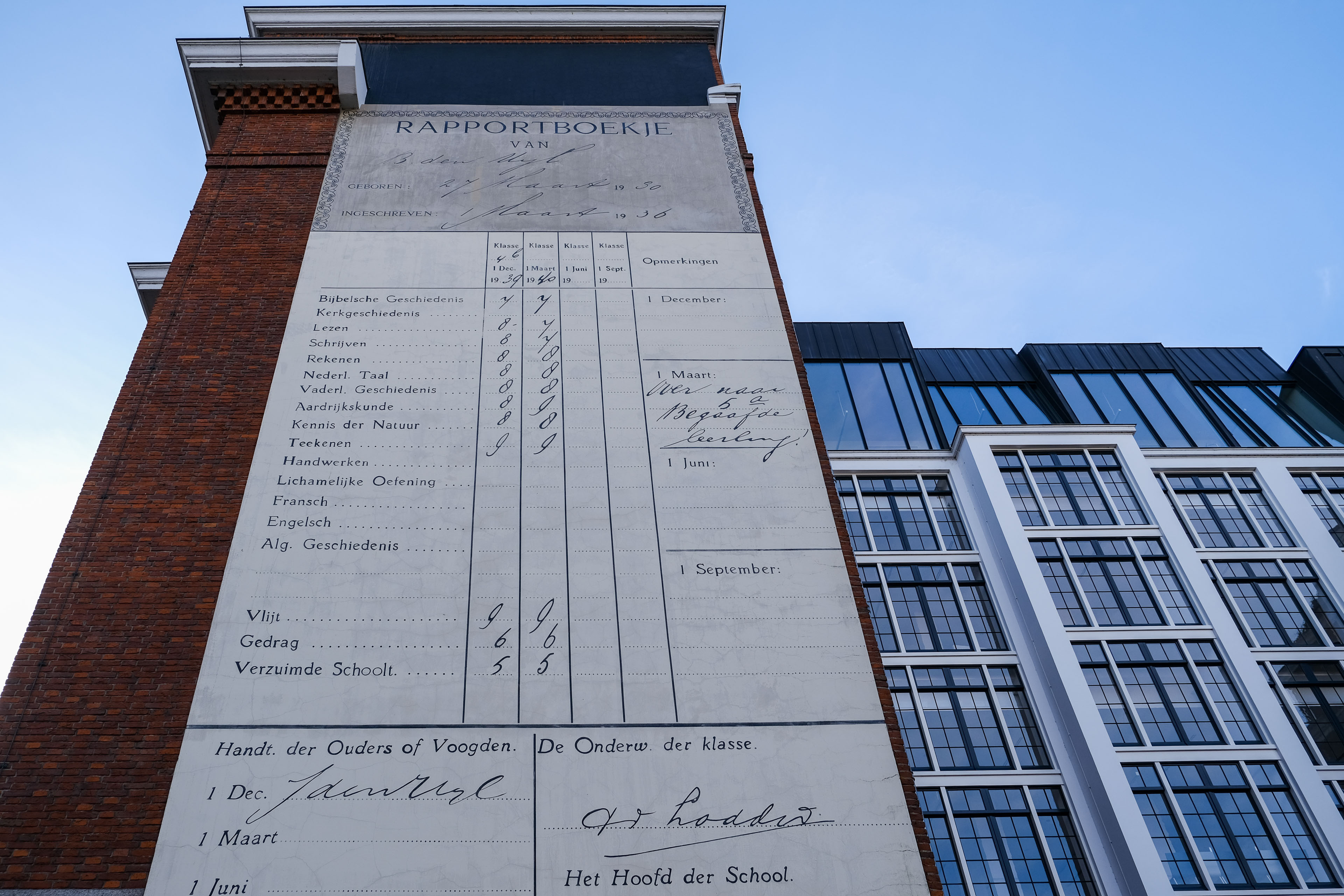 In continuous mode, it achieves 8 shots per second with the mechanical shutter, and up to 30 images per second with the electronic shutter with a small crop. A side note is that the camera can only use UHS-I SD cards and does not have an excessively large buffer. At full speed, it will be full in about a second and writing away will then take a while. Those who want to shoot a lot of sports can therefore better look at an X-T4.

With the Fujifilm X-S10, filming can be done in 4K resolution at 30 fps with 4:2:0 8-bit (on the SD card) or 4:2:2 10-bit (with an external recorder). This allows you to better use a flat image profile like an F-log. Those who do not work with an external recorder can still film in the camera in F-log, using the View Assist or even LUTs. For a compact camera in this price range, that is quite unusual. The camera can record in 4K in both UHD (3840×2160 pixels) and the wider DCI (4096×2160 pixels) format. The X-S10 does not do line-skipping or pixel-binning, but uses the additional pixels on the sensor to calculate the 4K image. This oversampling ensures good sharpness. Thanks to improved heat dissipation, the camera has a maximum recording time of 30 minutes in 4K and 60 minutes in FHD. In Full HD, you can film up to 240 frames per second, although the quality of these images is clearly a little less good. The Fujifilm X-S10 has little trouble with moire or rolling shutter and is therefore one of the better film cameras in this segment. This is further enhanced by the 3.5mm microphone input, the ability to connect headphones via USB-C and the micro-HDMI port for connecting an external recorder. 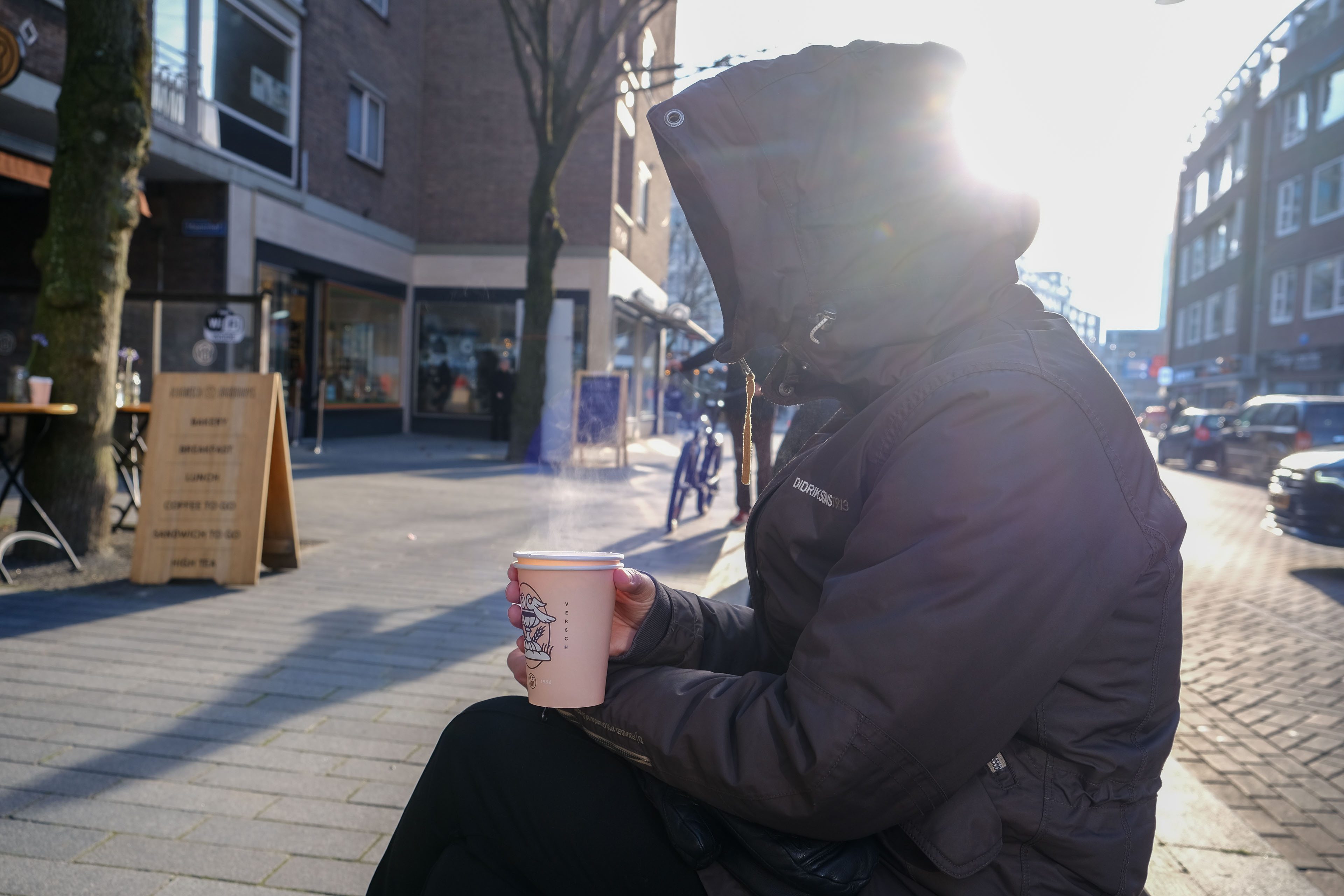 The Fujifilm has fast autofocus with eye and face recognition. The camera is also quite good at following moving subjects. It’s gives nothing up to the X-T4 on that point. But just like its more expensive brother, the X-S10 is just not as good at that as, for example, the latest Sonys with Real-time tracking. That makes the camera less suitable for sports photography, but the system works more than sufficiently for general subjects. Face and eye recognition also work well for video, although the camera can sometimes wander into the background in somewhat busier environments.

The Fujifilm X-S10 is a camera that offers a lot in a small package and at an attractive price.

With the X-S10, Fujifilm is taking a new path and offering an attractive camera with many capabilities for a large target audience. The operation is less analog. Real fans of the brand may regret that, but new users will be able to cope with the camera more easily. The capabilities for both photography and film are very extensive. Even advanced photographers and filmmakers will not miss anything on the X-S10. The image quality is high, the range of APS-C lenses impressive, and the additional capabilities such as the film simulations are handy. Furthermore, the camera is also nice and compact and light, which can of course be an important reason to choose APS-S over a full frame. Only if you want to do a lot of sports or nature photography where autofocus and long series of high-speed shots are important, or if you are looking for a camera for all weather conditions, it is wise to look at a more high-end model.