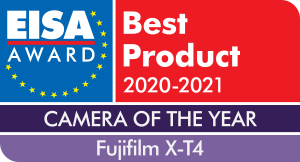 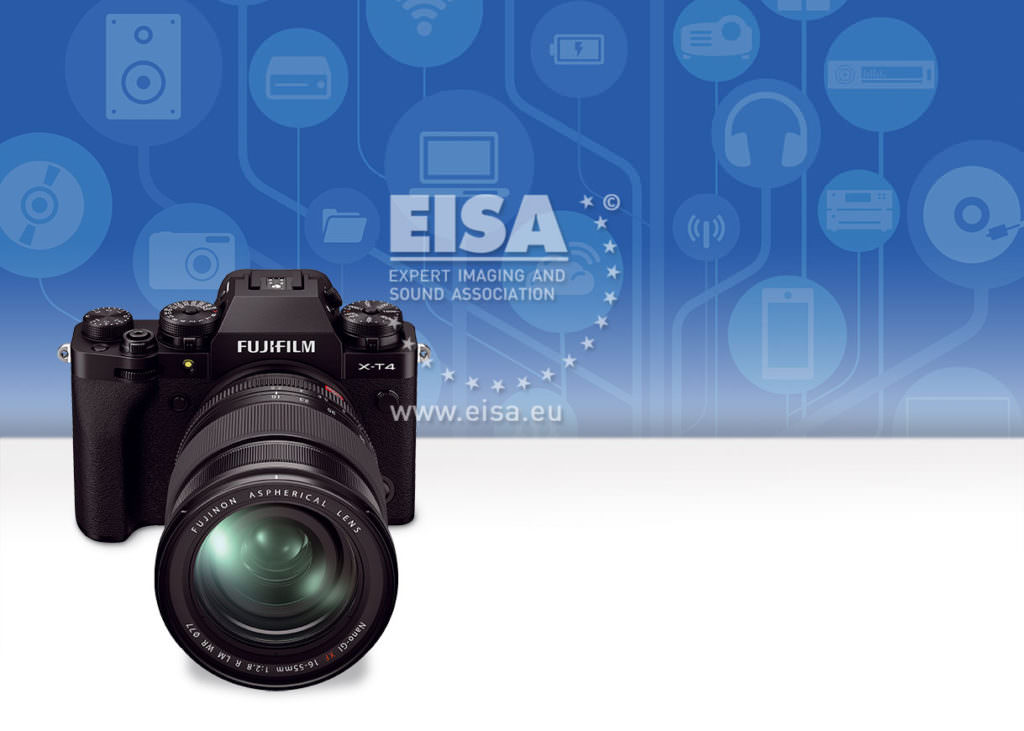 The Fujifilm X-T4 is an outstanding mirrorless camera with a 26-million-pixel X-Trans CMOS sensor. It combines a compact size with very high image quality, impressive speed (up to 20fps at full resolution) and professional video capabilities such as 4K 60fps recording. One of its most important new features is its 5-axis in-body image stabilization, which compensates for between 5 and 6.5 stops depending on the lens, ensuring pin-sharp shots even with long exposure times. The monitor can now be swung out to the side, allowing easy self-recording. Fujifilm has surely created the best APS-C mirrorless camera yet.

The Fujifilm X-T4 was awarded an EISA Award 2020-2021.
This article is part of an overview of this election.
Visit eisa.eu for an overview of all winning products from all categories.z 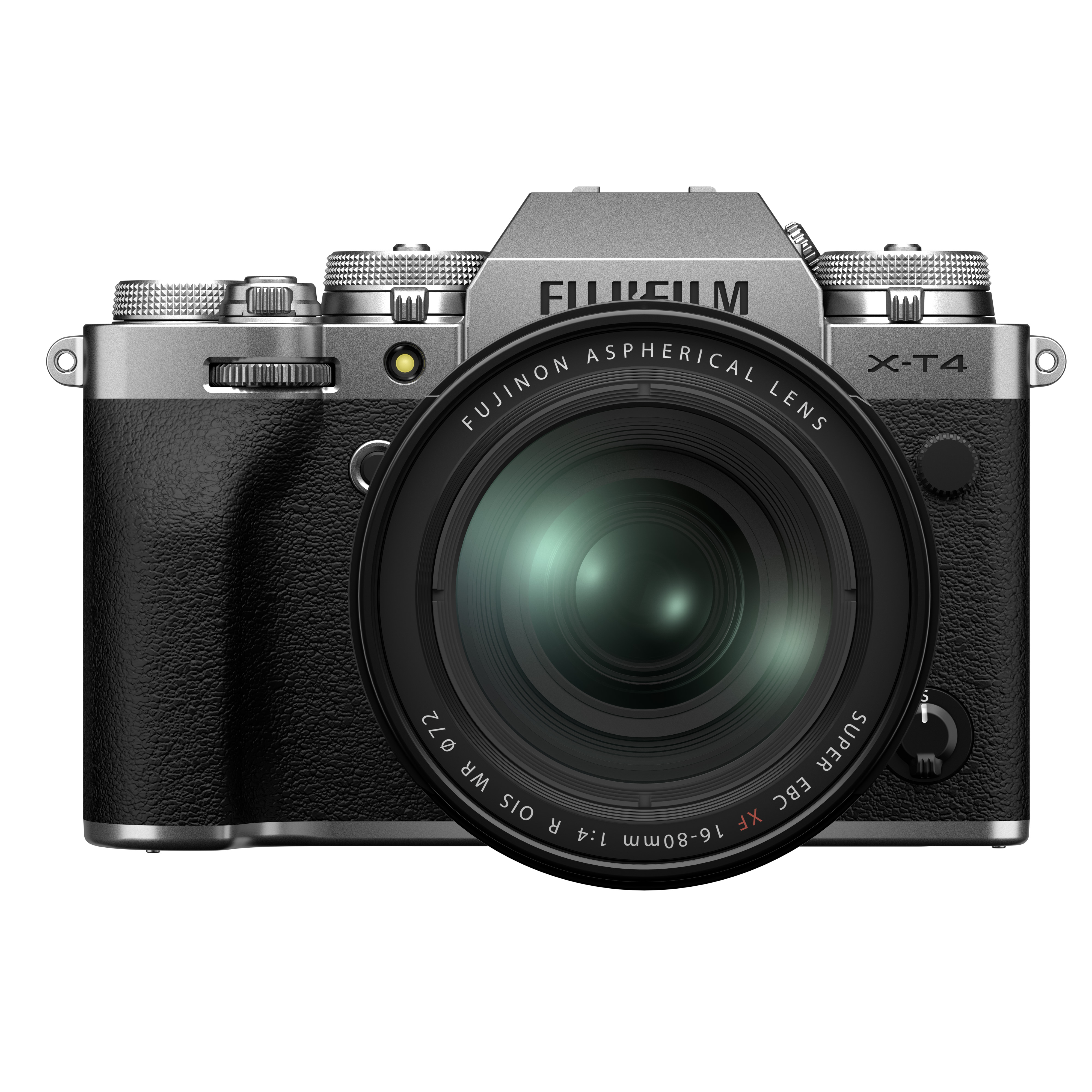 The X-T4 is the new top model in Fujifilm’s XT series.

Two years after the powerful and fast X-T3, Fujifilm presented the X-T4. This system camera has image stabilization built into the body, improved autofocus, a more versatile screen and a stronger battery. Is it time to replace your X-T3?

The Fujifilm X-T4 is the new top model in Fujifilm’s X-T series. It has the same 26-megapixel BSI CMOS sensor in APS-C format as the X-T3. This sensor uses Fujifilm’s own X-Trans color filter, making a low-pass filter to prevent moiré unnecessary. And just like the X-T3, the X-T4 can film in 4K resolution, with a maximum frame rate of 60 fps. 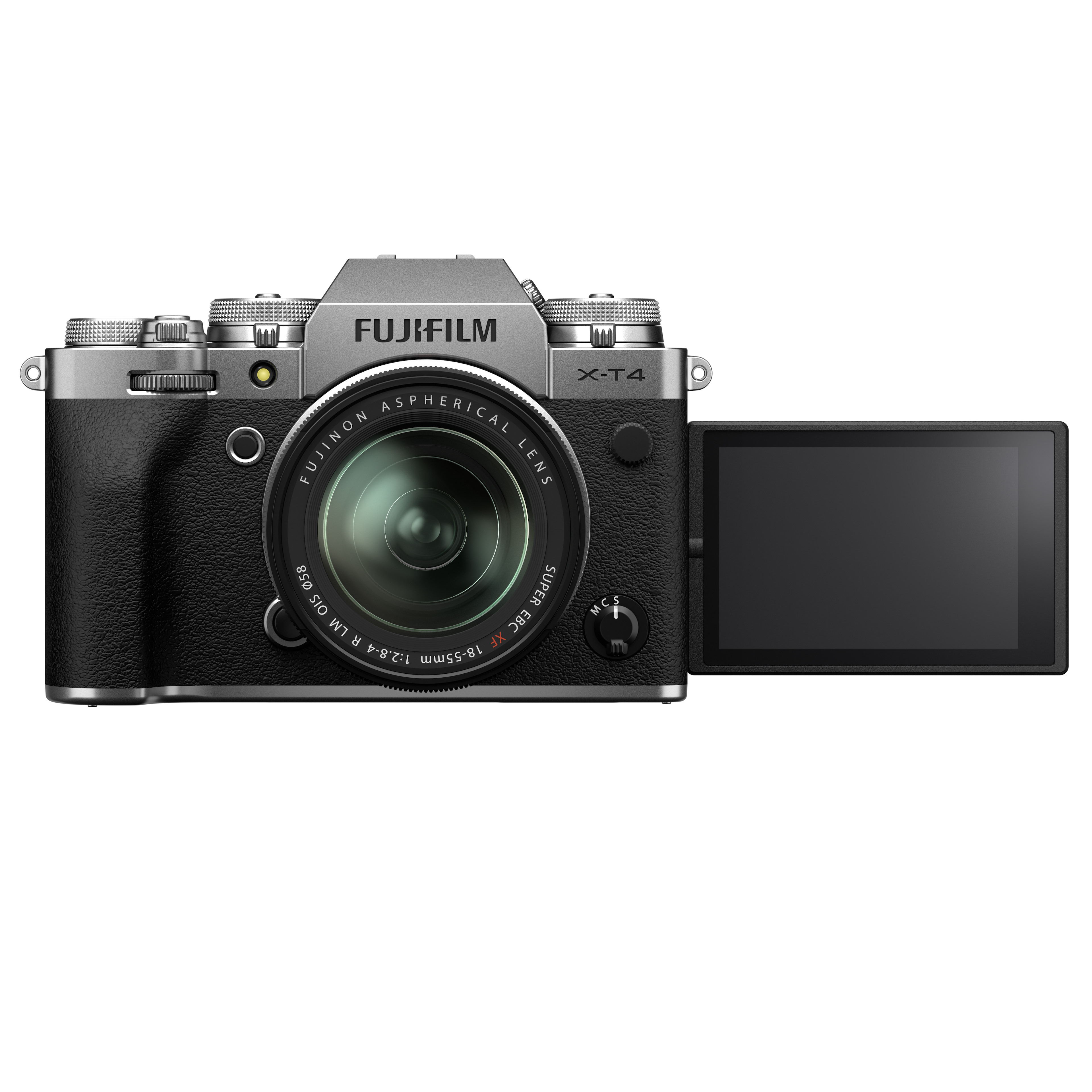 The screen can fold all the way out and rotate.

The biggest difference is on the inside. The Fujifilm X-T4 is the first in the X-T series with a stabilized image sensor. Fujifilm already had a system camera with in-body image stabilization (IBIS) (in addition to the medium format GFX 100): the X-H1, designed for video. However, that device is larger and heavier than an X-T camera, which means that a major advantage of Fujifilm’s compact system cameras is lost.

To maintain the compactness and light weight of the X-T series, Fujifilm further developed the IBIS system of the X-H1. The IBIS in the X-T4 uses magnetic springs instead of coil springs, and it takes three magnetic units to drive the IBIS (the X-H1 has six). Because the gyroscopic sensor in the X-T4 is also more accurate than the one in the X-H1, the IBIS provides an improvement of up to 6.5 stops, compared to 5 stops on the X-H1. That maximum gain is only achieved with 18 of the 29 available X lenses, including all prime lenses and the non-stabilized zoom lenses. With other lenses, you gain 5 to 6 stops, calculated according to the CIPA standard.

What this means in practice is that with the Fujifilm X-T4 you can use slower shutter speeds without the need for a tripod. With a 35mm focal length, I was able to take sharp pictures by hand with shutter speeds of up to 1 second – while I don’t have the most steady hand. The IBIS also proves its usefulness during filming. The hardware image stabilization can then be combined with digital image stabilization, at the expense of a 1.1x crop in 4K/30f and a 1.3x crop in 4K/60f.

The X-T4 also got a new shutter unit. When using the mechanical shutter, higher series speeds are therefore possible than with the X-T3: with live view 8 frames per second compared to 5.7 and without live view 15 compared to 11 on the X-T3. With the electronic shutter, the maximum speed has remained the same: 20 frames per second, or 30 with a 1.25x crop. The shutter is also quieter, and will last for 300,000 shots, according to Fujifilm.

In terms of size and weight, the Fujifilm X-T4 sits in between the X-T3 and the X-H1. A striking difference from the X-T3 is the screen, which now fully folds out and rotates. This makes the screen much more suitable for filming while the camera is on a tripod, and it can also be used for vlogs. The Q menu button and A-EL button have been swapped, and the camera got a slightly deeper grip. There is also a new type of battery, with a higher capacity of 500 images according to the CIPA standard, or 600 in Eco mode. In practice, you can take even more shots, depending on how intensively you use the screen and the electronic viewfinder. These are as sharp and clear as on the X-T3. Like the X-T3, the X-T4 has two slots for fast UHS-II SD memory cards.

I already mentioned that the screen and the addition of IBIS make the X-T4 more suitable for video. And it doesn’t end there. The camera has a separate switch to switch between shooting and filming, and the camera menu and Quick menu adjust accordingly. That makes it much easier to use separate settings for photo and video. By flipping the switch, you turn your photo camera into a camcorder, and vice versa.

Just like the X-T3, the X-T4 can film with the F-Log profile. This allows you to capture a ‘flat’, low-contrast image that offers many options for post-processing. But when using a Log profile, it is sometimes difficult to estimate what the end result might look like. That’s why the X-T4 has the F-Log View Assist feature. This shows what an F-Log recording will look like after converting to the Rec.709 standard, so that you can assess on the spot whether it’s good while shooting.

The Fujifilm X-T4 has a 3.5mm input that can accommodate an external microphone and the line input from an audio device. Unfortunately, it does not offer a direct headphone output. An adapter is included to connect headphones to the USB-C connection. The optional battery grip VG-XT4 has a headphone output.

Photographically, the X-T4 delivers the same excellent results as the X-T3. Images in jpeg format show a lot of detail and true-to-life colors, without unnatural sharpening. Fujifilm wouldn’t be Fujifilm if you couldn’t adjust the color reproduction via the many film simulations. The X-T4 got the new Eterna Bleach Bypass simulation, and a variation on the Color Chrome setting with blue filter.

For AF-C accuracy is improved, especially for subjects that are not in a straight line and move at a constant speed. The new focus algorithm also works well when filming. The image quality in 4K/60f is very good, and in Full HD it is now possible to film in 240f for a 10x slow-motion effect.

Good news for those who want to photograph sports and action: the autofocus has also improved considerably. The hardware is identical (425 phase-detection AF points covering the entire image area), but the AF algorithm has been improved. It now also uses the shape and color of a subject to track it. Face and eye recognition also work noticeably faster and better. Knowing Fujifilm, we wouldn’t be surprised that these improvements are also coming to the X-T3 via a firmware update. 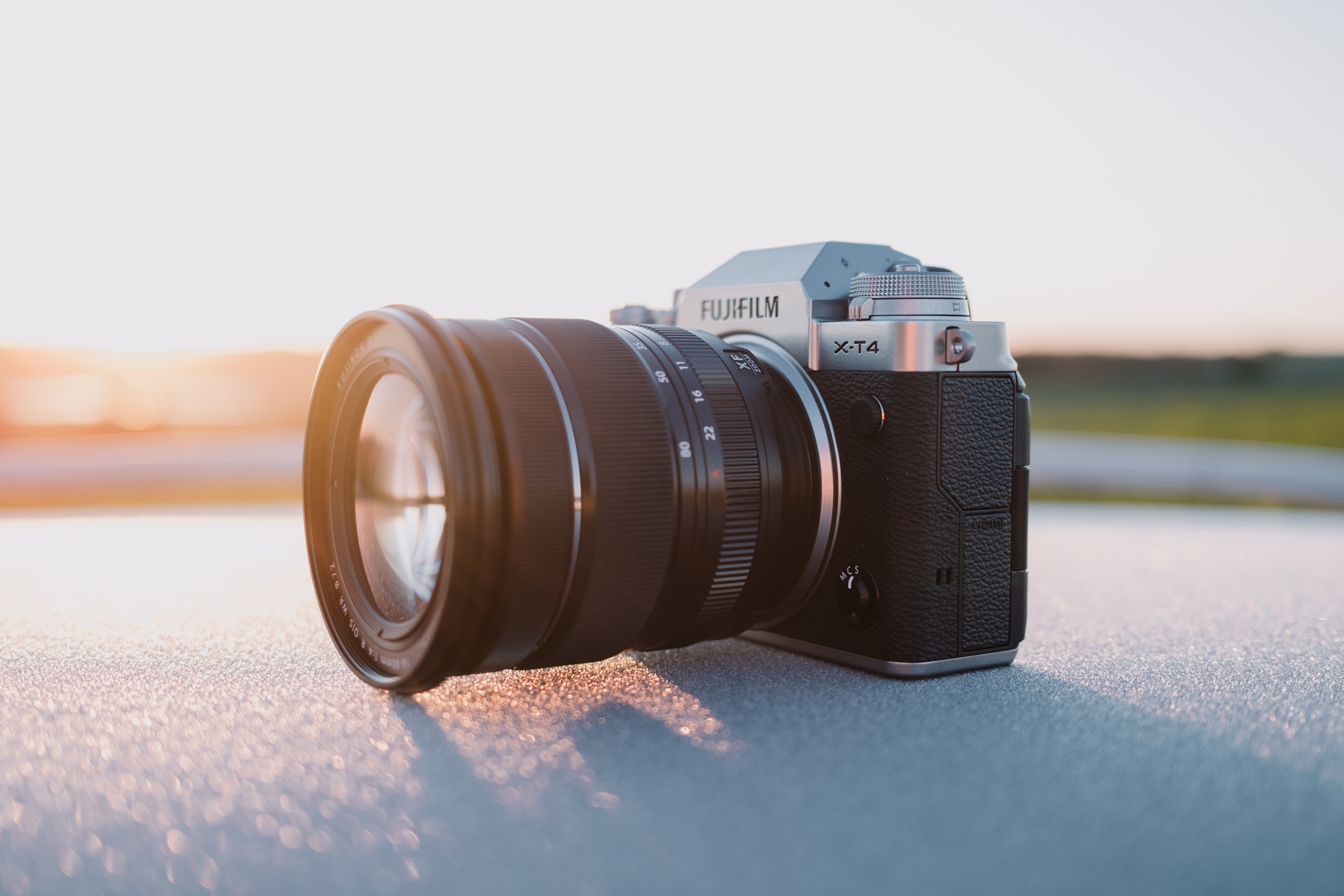 The Fujifilm X-T4 brings the best from two worlds and is therefore primarily intended for those who combine photo and video. Those who only take photos, however, do not have to replace their X-T3, unless it’s for the image stabilization. For those who only shoot video, the X-H1 remains a good choice, and Fujifilm has announced that a successor is coming.