The Yongnuo EF 50 mm f/1.8 is a 50 mm f/1.8 fixed-focal length lens with AF. A standard lens on a camera with a full-frame sensor with high brightness, which also makes the lens suitable for photographing in the dark without a flash. Or for playing with background blur/bokeh. If, as a starter or amateur photographer with a Canon full-frame SLR camera, you want to buy your first lens with a fixed focal length, then you cannot go wrong with the Yongnuo 50 mm f/1.8. For less than 75 euros, you get one-ounce piece of camera equipment with surprising image quality. We previously reviewed the Yongnuo 50 mm f/1.8 on a Canon with an APS-C sensor. As far as image quality is concerned, we saw no differences from the Canon 50 mm f/1.8 STM. Would that also be the case on a full-frame camera? We put it to the test with the Canon 5DsR: the toughest possible test at the moment.

Yongnuo, made in China 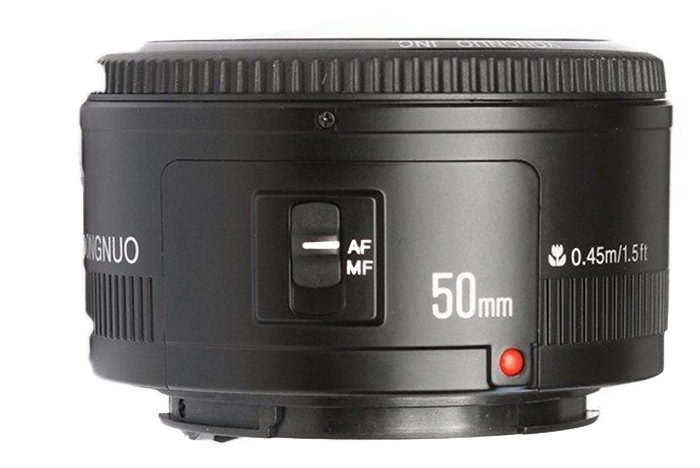 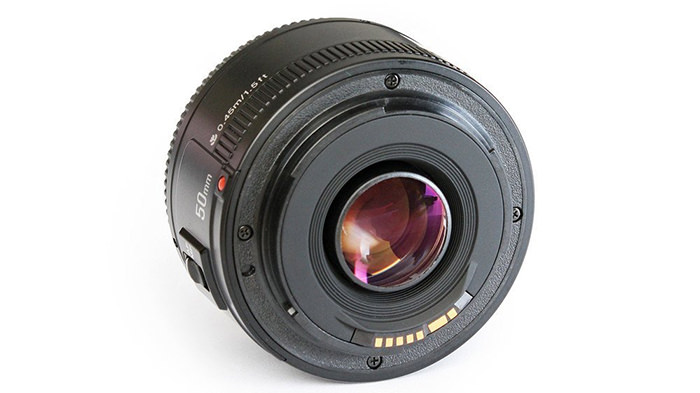 The appearance of this lens is strongly reminiscent of an old Canon lens. There is one switch on the lens, with which you choose between AF and manual focusing. This is a light, but not very compact, lens. The lens consists of 6 lens elements in 5 groups, just like the Canon 50 mm f/1.8 (II and STM). The front lens is hidden deep in the housing, so that you do not really need a lens hood. One is not included, either. The Canon 50 mm f/1.8 II had a plastic mount. Hence the nickname “Plastic Fantastic”. The Canon 50 mm f/1.8 STM again has a metal mount, but the Yongnuo still has a black plastic lens mount.
Manual focusing is no joke with the Canon 50 mm f/1.8 or f/1.8 STM. The same applies for the Yongnuo: at the front of the lens there is a very narrow ring with which you can focus manually. It works, but I think the focus ring should have been wider. If you turn on the AF, then the focus ring turns as well. That feels strange if you are holding the focus ring while focusing.

Distortion is of a normal level (-0.75%) for a 50 mm fixed focal length. The lens elements are equipped with a coating with multiple layers, so that reflections and glittering is reduced and the light transmission is increased. This creates contrast-rich shots with natural colors, but with bright backlighting flares can still occur. If you photograph directly into the sun, then even if the sun is outside the frame, then you can come across green ghosts. The Yongnuo is just as good on this point as the Canon 50 mm lenses.
As far as vignetting is concerned, the performances for files not corrected for lens errors are practically the same as those with the Canon 50 mm f/1.8 STM. Vignetting is clearly present (more than 3 stops at full aperture, at f/2.8 always one and a half stops). This is naturally easy to resolve with software (Photoshop, Lightroom or another photo editing program). This explains the differences between the Yongnuo and Canon 50 mm f/1.8 STM test conclusions. With the Canon, it is possible to correct the jpg files for lens errors. With the Yongnuo, you have to do that afterwards. 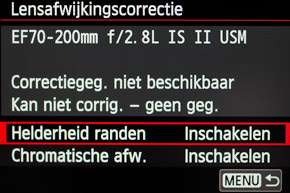 As far as sharpness is concerned, there is no difference from the Canon 50 mm f/1.8 STM that we recently reviewed on a Canon 5Ds. At full aperture, the sharpness is far from optimal, in particular in the corners. After stopping down two stops, the highest sharpness is reached, and the Yongnuo (just like the Canon by the way) gives nothing up to much more expensive lenses with the same focal length (but usually tested on a less expensive camera with fewer pixels).

As far as image quality is concerned, there are no real differences to find between the Canon and the Yongnuo 50 mm f/1.8 STM, not even on a full-frame camera with a 50-megapixel sensor. For those who only photograph in jpg, it can be a plus to choose the Canon 50 mm f/1.8 STM, because Canon cameras only correct for lens errors of Canon lenses. If you photograph in RAW, then the Canon and the less expensive Yongnuo are practically the same. Whether you have a Canon 6D or a Canon 5DsR, set the aperture to f/8 and let yourself be surprised by the image quality of the Yongnuo 50 mm f/1.8. For this price, you cannot really go wrong.